Recognizing September as Hunger Action Month, Michael, the Food Bank of Delaware’s Food Distribution Director, posted on social media explaining how he knew what it was like to be hungry and homeless – not from the distance of professional perspective – but from the trauma of his own childhood experiences.

“I know what it’s like. I know how it feels,” he said describing the physical ache that accompanies emptiness of not having enough to eat. Michael, now 25, talks about those painful memories, hoping that his story will help others. “I really think the people we serve could resonate with my story.”

Last year, the Food Bank distributed more than 15,536,854 pounds of food, not only through mass distribution sites, but also out of our community-based mobile pantries, backpack meal kits, and our Healthy Pantry Centers; indirectly and directly Michael impacts many food-insecure Delawareans.

Michael recounts the struggles of his childhood. Elsmere seemed like a good area in which to grow up in. In 2002, his family – his mom and dad and sister, moved to a mobile home community in the Bear area. “Both my parents were addicts and out of work. We were relying on SNAP, which was great if you can go to the grocery store, but it was a food desert,” Michael said. He vividly recalls a week were there was no food; he and his sister ate half peanut butter sandwiches. “To this day, because of that trauma, I will not scrape peanut butter out of a jar,” he said. “We had to be adults at a young age. It’s not good memories. We were exposed to grown-up conversations. With addicts, rational behavior goes out the door.”

Things went downhill after his parents got caught up in heroin, in the opioid epidemic. The family moved from Bear back to his grandmother’s unfinished basement in Elsmere near what Michael describes as a drug hot spot. In addition, he remembers vacuuming water out of his family’s quarters every time it rained. Attending school was not a priority. “There were just too many other worries. I just couldn’t worry about it,” he said. In his early teens, Michael opted to stay at friends’ homes as frequently as possible. Couch surfing was more attractive than the damp basement that afforded no privacy or sanctuary. “People think of homeless as not having a place to stay, but it’s not always,” he explained.

Thanks to one of his friends who invited him to go with her family to “a potluck dinner at a gay guy’s house – that’s what she said,” Michael met Andrew Zeltt. Coincidentally – or not – at the time, Andrew had agreed to be part of a pilot program designed to partner gay adults with gay teens at the Big Brothers & Big Sisters of Delaware.

Michael, who was about 14 ½, recognized he was gay and struggled with classmates who made his time at school very uncomfortable – as if it weren’t bad enough already. In addition, before the days of universal free and reduced lunches, he remembers going through the cafeteria line for a hot meal thinking his parents filled out the necessary paperwork. They had not, so when he got to the cashier, he learned his lunch wasn’t paid for. She took his lunch, threw it in the trash, and handed him a cold sandwich. The pain he recalls is still palpable in his voice.

“Andrew got me out.”

Andrew Zeltt is the man Michael calls “Dad.” Although they’re not linked by DNA, Andrew initially offered Michael a safe place to stay – his own room, a home. Eventually, Michael moved in with Andrew, then eventually Andrew navigated the appropriate channels to obtain legal guardianship with little to no objection from his birth family. Andrew, a long-time volunteer at the Food Bank’s Newark facility – and for other not-for-profit organizations — introduced Michael to volunteering at the Food Bank. It’s a cliché, but true: the rest is history.

“Most people think I’m his real father,” said Andrew, who recalls providing for Michael’s basic needs – like him getting glasses and setting boundaries – in the early days. “He needed glasses, and when he got them his grades started improving. I told him about how important education is. He had no guidance at all.”

Michael works with the Food Bank’s nutrition team to provide people with food they need and want, culturally appropriate food, and to connect with appropriate software so people can order ahead for pick-up, to arrange for mobile pantries in food desserts – the initiatives continue.

“This [the Food Bank] is my chosen family. It means a lot to me. So, from just starting here as a volunteer, so many opportunities have been offered. I look at this as a call to action, to take down restrictions to food and identify places we can get to,” Michael said. “I’m working to make changes, to getting out the right meal boxes, to educate our team on trauma-informed approaches, to take our name and logo off our boxes. That removes the stigma; I know how embarrassing it feels.”

Andrew admits that at times parenting a teenager was a challenge, but when Michael was 18 he asked if he could take Andrew’s last name. “I had no idea this would happen,” said Andrew. “He’s amazing. He’s grown up, and he really cares about people. The food insecurity was very hard on him. He’s a good person, and he loves the Food Bank. It’s not only his job, it’s his passion. It wasn’t always a good story, but he’s doing great in life.” 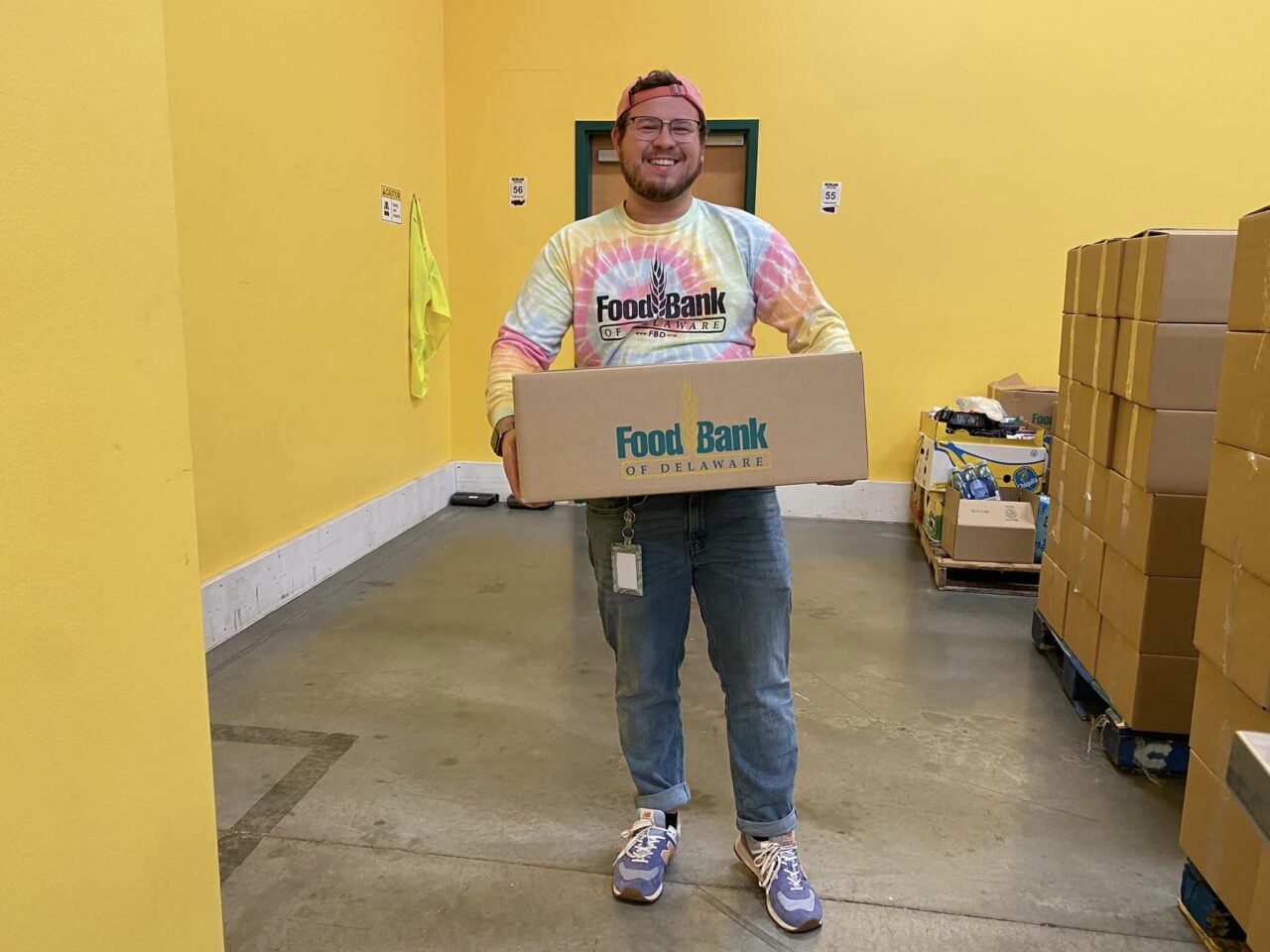 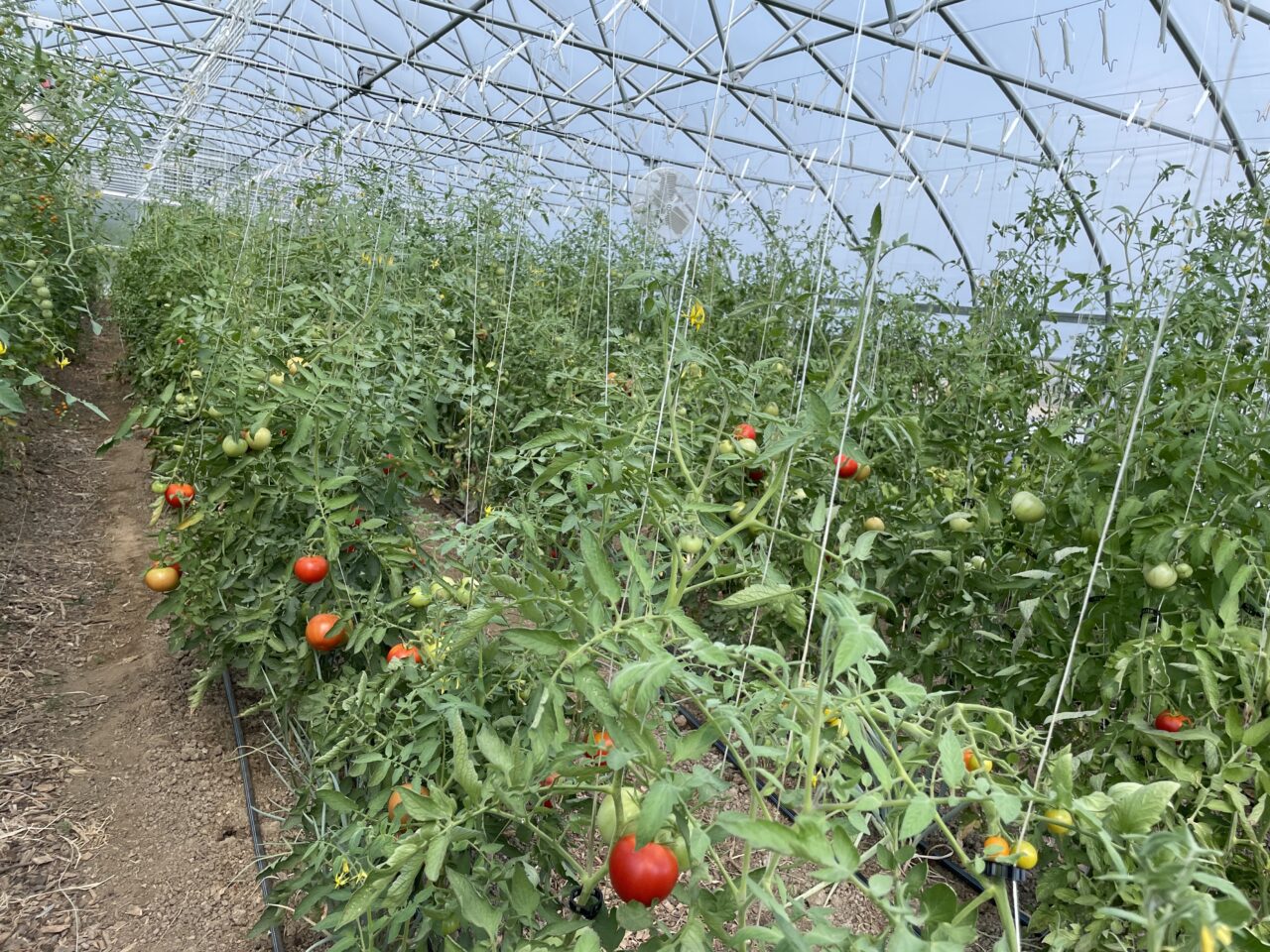 Food Bank service helps Dover family get back on their feet

Things are looking up for Iris, her husband and their infant daughter.  Her husband has a job, and as a breast-feeding mom she’s able – for now – to stay at home with the baby. Although they have no car, their weekly box of food delivered to their door from the Food Bank of Delaware…

Dover resident Tiffany is somewhat new to Delaware, and adapting to her life here hasn’t been easy. This Mississippi native moved north with two sons a couple of years ago to be closer to her mother. Although her mother has since passed away, Tiffany – who is disabled due to mental health issues – is… 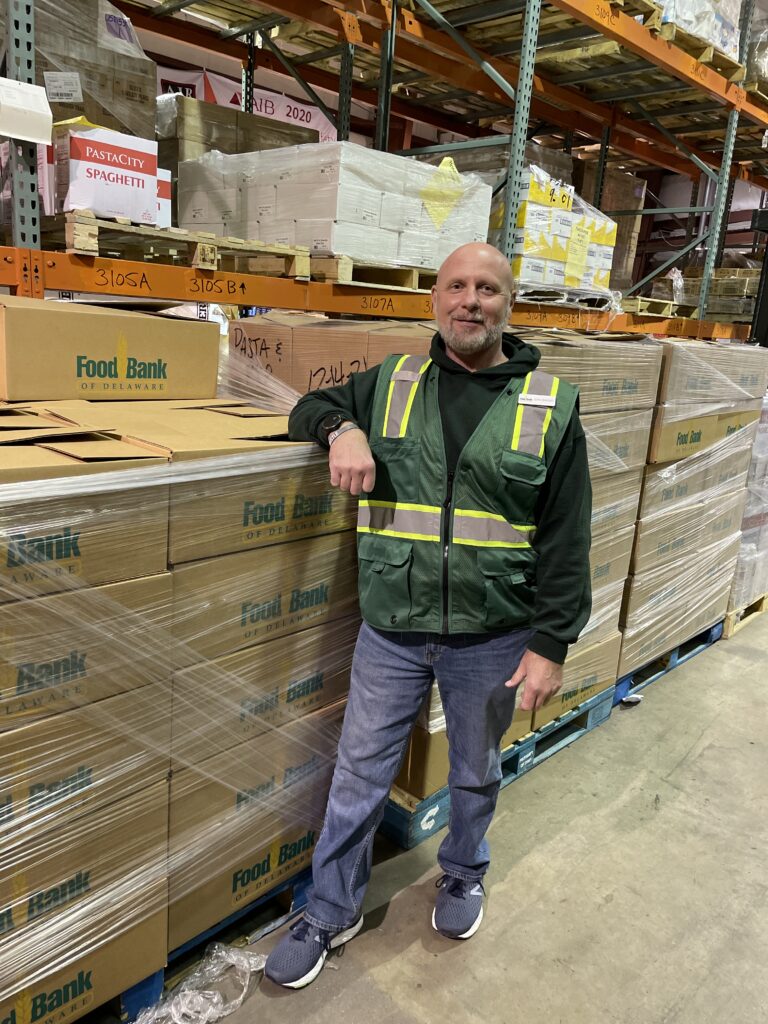 For John Snarsky, joining the Food Bank of Delaware staff as Milford Operations Director feels like . . . home and family. When he came onboard in November, he brought with him nearly three decades of experience in the restaurant industry, starting as a pizza delivery guy while in college. From there he climbed the… 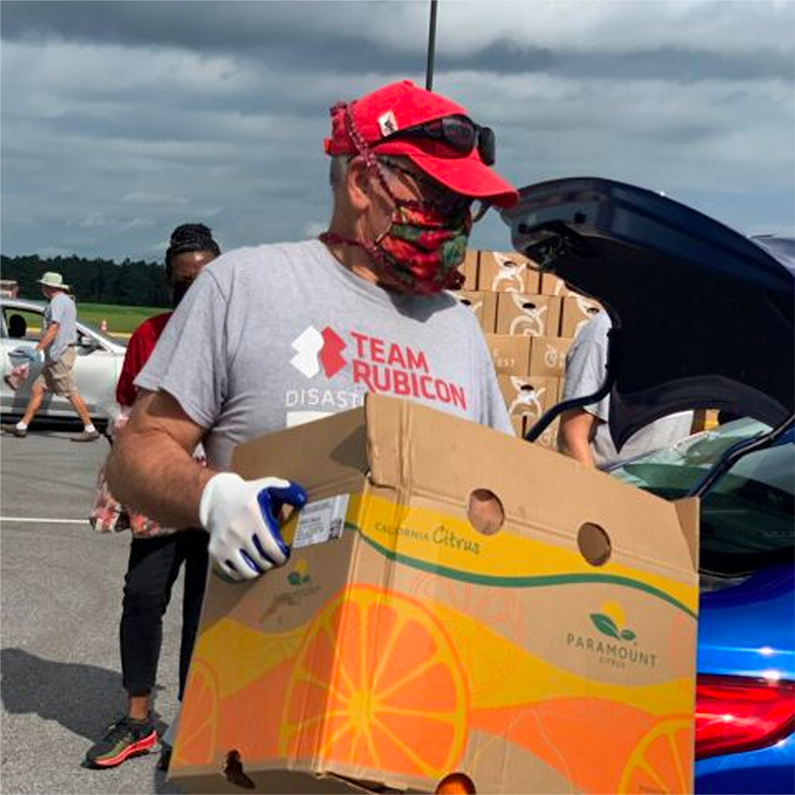 Drive-through pantry makes a big difference for family of three

Newark resident, Melissa, certainly didn’t anticipate having to reach out for assistance after she lost her customer service job in August. But she’s been able to find a new job. The 35-year-old mom of two teenagers discovered help while searching online; she registered for one of the Food Bank of Delaware’s drive-through pantries. “I guess…