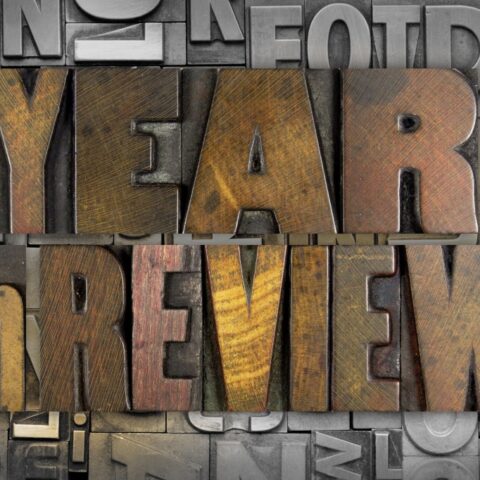 It doesn’t seem too long ago that we were putting together our 2014 Year in Review. The year has certainly flown by, and we are proud to say that we’ve had another successful year filled with accomplishments to help meet the needs of Delawareans at risk of hunger. While we would have liked to close the year by declaring that we are a hunger-free state and our services are no longer needed, this, unfortunately, is not the case.

Thank you to the thousands of volunteers, donors and advocates who make our work possible. Here’s a recap of the past 12 months!

January 2015: We started 2015 by unveiling our brand-new Bank of America Community Nutrition and Education truck. The Bank of America-funded truck features a fold out grill, potable water tank, hand-washing station, generator and canopy. It is used for large-scale mobile pantries, community events, cooking demonstrations and more. In addition to unveiling the truck, Bank of America also presented us with a check for $75,000 to help fund truck operations!

February 2015: After launching a new ServSaf

e class for the general public at the Newark facility in January, the class was hosted at the Milford Branch for 12 food service workers in late February. Jeffrey, a kitchen manager at Chick-fil-A in Milford, was one of the participants. “This class is great. It gives me the tools I need to enforce food safety in the kitchen. Of course, Chick-fil-A already has something in place, but this gives me more,” he said.

March 2015: Thanks to the new Produce Access Program, we were able to secure a 60,000 pound donation of black-eyed peas, green beans and peas from J.G. Townsend Jr. & Company in Georgetown. The frozen produce donation came in bulk, and volunteers vacuum-sealed the produce into smaller family-sized bags. The Produce Access Program’s aim is to provide more fruits and vegetables to low-income Delawareans. This initiative shifts the organization towards a more proactive food sourcing strategy and commits additional resources to ensure a better, more consistent supply of produce.

April 2015: We held our annual dinner at the Milford facility in mid-April. The annual event is our opportunity to honor and thank those who support our mission.  Tim Hunter, chef instructor, and his nine Culinary School students prepared and served a gourmet meal for our staff and guests. They who also had an opportunity to savor craft beers donated and served by our neighbors, Mispillion River Brewing. The menu, served at buffet stations, was paired with local beers. Honorees this year included: James Buford and Rich Simpson, Volunteers of the Year; The Harry K Foundation, Donor of the Year; Michael Haritos, Supporter of the Year; State Sen. Bryan Townsend, Legislator of the Year, Sussex Community Corrections Center, Partner of the Year. 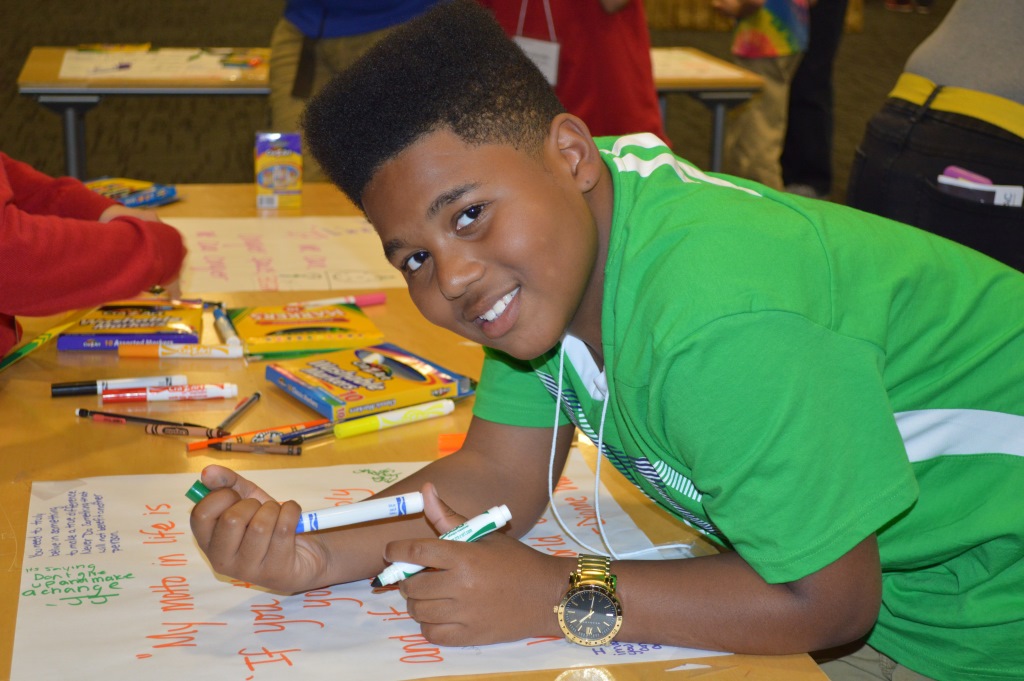 May 2015: May was a busy month! We started the month with a very successful Coming Together conference. In partnership with the Food Research and Action Center and Brae’s Brown Bags, we held our first-ever multi-generational conference. More than 500 adults and children attended the conference on Monday, May 4 at the Chase Center on the Riverfront. The anti-hunger conference featured programming for both adults and children. A Coming Together Town Hall Meeting featured a panel of prominent Delaware Republicans and Democrats including Senator Colin Bonini, Charlie Copeland, Chairman of the Delaware GOP and Senator Bryan Townsend. Following the morning programming, children attended their own conference featuring cooking and fitness demos, gardening, letter writing to legislators and more! In addition, the winners of the School Breakfast Challenge were announced.

May 2015: May was so busy that we couldn’t pick just one event. On May 13 a sea of tie-dye descended on Legislative Hall for our annual Legislative Day. Our mission was to create 5,200 backpacks (one entire week’s worth) during our five-hour packing event on the Mall. As the trucks arrived in Milford and product was unloaded, it seemed like the task might be too large. Pallets and pallets came off the truck and were moved into the appropriate locations to set up packing lines. Prior to the end, state employees across Dover were alerted that we would be completing this job. Amidst all the business of volunteers moving about, we also served lunch prepared by our culinary students. Volunteers, legislators, state employees and staff dined on pulled chicken and pulled pork sliders, grilled vegetables and coleslaw. By the end of the day, we anticipate that more than 150 volunteers came out to help pack backpacks, and to make it even better, the job was fully completed by 3:00 PM. That’s right – 5,200 backpacks packed in less than three hours!

June 2015: We kicked off our “Hunger-Free Summer” in June by hosting two special events to build awareness of the summer meal program! Thanks to a generous donation from ConAgra foods, we were able to offer mobile meal sites at local parks in New Castle County. Parks included Wilton, Dickey and Cheltenham Village. Kids were invited to special events that included turkey burgers grilled by students from The Culinary School, music, games, face painting, a visit from the Food Bank’s mobile green house and more fun! The Dickey Park event had a special visit from former NFL player, Sean Landeta and the USDA Eat Smart Live Strong Power Panther!

July 2015: The fourth annual Food Lion Feeds Hunger Relief Day was held at the Delaware State Fair on Monday, July 27. With five Food Lion-brand canned goods fair attendees received free admission. Thanks to the generosity of Food Lion, the Delaware State Fair and the community, we collected 19,516 pounds in just one day! We also received a special visit from United States Senator Tom Carper! Since the inception of Food Lion Feeds Hunger Relief Day in 2012, we have collected  close to 80,000 pounds of food.

August 2015: The Delaware Farm Bureau held its first annual Kent County’s Bounty Farm to Fork dinner on Saturday, August 22 at the Knutsen family’s dairy farm in Harrington. A gourmet sit-down dinner was prepared by chefs from Abbotts Grill, our own Tim Hunter, Chef Instructor at The Culinary School at the Milford Branch and students from The Culinary School. The first-time event raised more than $6,600 to help eliminate hunger in Kent and Sussex Counties.

September 2015: September is Hunger Action Month, and it is always a busy time at the Food Bank of Delaware! To start the month, we held two special events – Dinner in the Orchard at T.S. Smith & Sons in Bridgeville and An Evening in the Garden at the University of Delaware. Guests enjoyed fresh foods, beer and wine and

live entertainment at both events. Food for both events was prepared by students from The Culinary School. Our second annual Golf Tournament to benefit the Backpack Program was held on a beautiful day at Fieldstone Golf Club in Greenville. More than $50,000 was raised through the tournament. In addition to the slew of special events, we also celebrated the accomplishments of two graduating culinary classes – one in Newark and one in Milford! To cap off the month, we also received significant contributions from the BJs Charitable Foundation to increase partner capacity ($23,500) and the Walmart Foundation ($46,875) to help feed children at risk of weekend hunger. 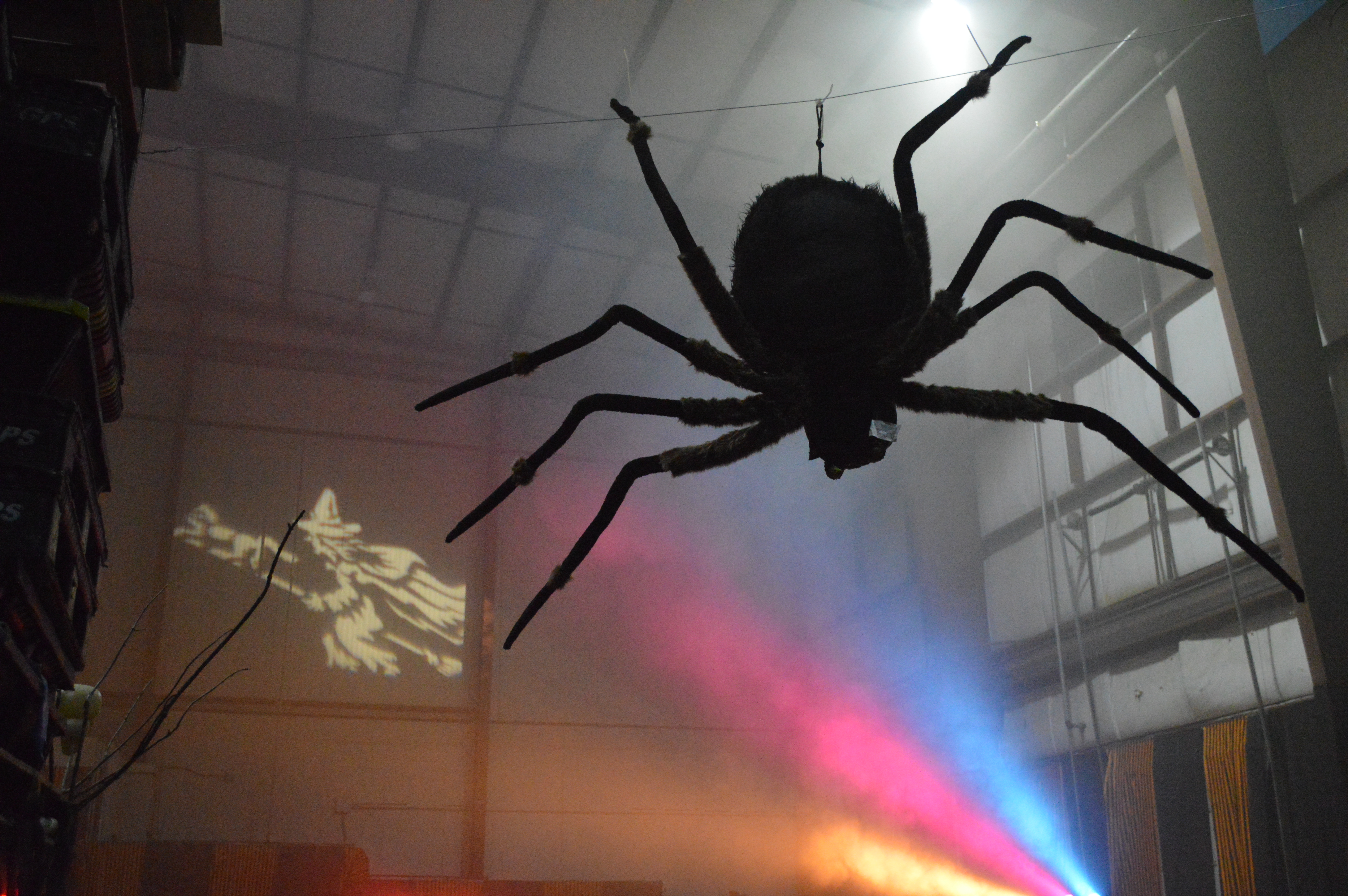 October 2015: We transformed the warehouse into a haunted house for our Halloween-themed Blue Jean Ball on Saturday, October 24. Presented by Iron Hill Brewery and Restaurant, guests enjoyed a fall seasonal menu, beers straight from the brewery, wine and live entertainment from Mike Hines and The Look! The band had guests dancing all night long. Thanks to generous corporate supporters and community donors, more than $64,000 was raised to help fight hunger in Delaware.

November 2015: The community stepped up in a big way this Thanksgiving season to ensure that families had access to holiday meals. The annual Turkey Round Up was held on Thursday, November 12 and Friday, November 13 at Food Lion stores in Bear, Middletown and Dover. The teams at iHeartRadio’s 94.7 WDSD and Mix 92.9 FM led the charge to help bring in nonperishable goods, frozen turkeys and cash. In total, 5,751 pounds of nonperishables, 511 frozen turkeys and $31,469.32 were collected. A significant portion of the financial donation was in thanks to the generosity of HMS Host, the organization that runs the Delaware Rest Stop. Thanks to their customer change collection, $20,000 was donated. DART First State’s Stuff the Bus also took place the second week of November. Thanks to the support of the community, 18,221 pounds of food were collected through the annual DART Stuff the Bus Thanksgiving food drive.

November 2015: In addition to two major food drives, Bank of America announced a $75,000 donation at a Thanksgiving mobile pantry held at Westside Family Healthcare in Wilmington on Friday, November 13. Thanks to the support of Bank of America employees, 200 boxes filled with holiday staples (all collected by bank employees!) and frozen turkeys (more than $5,000 was collected to purchase turkeys!) were distributed to families in need. United States Senator Chris Coons, State Representative Stephanie Boulden and Councilman Darius Brown were also on hand for the distribution. Students from The Culinary School showed pantry participants how to use Thanksgiving leftovers to prepare a mashed potato and turkey pancake!

Chesapeake Utilities also donated $26,500 towards our Thanksgiving For All distribution. 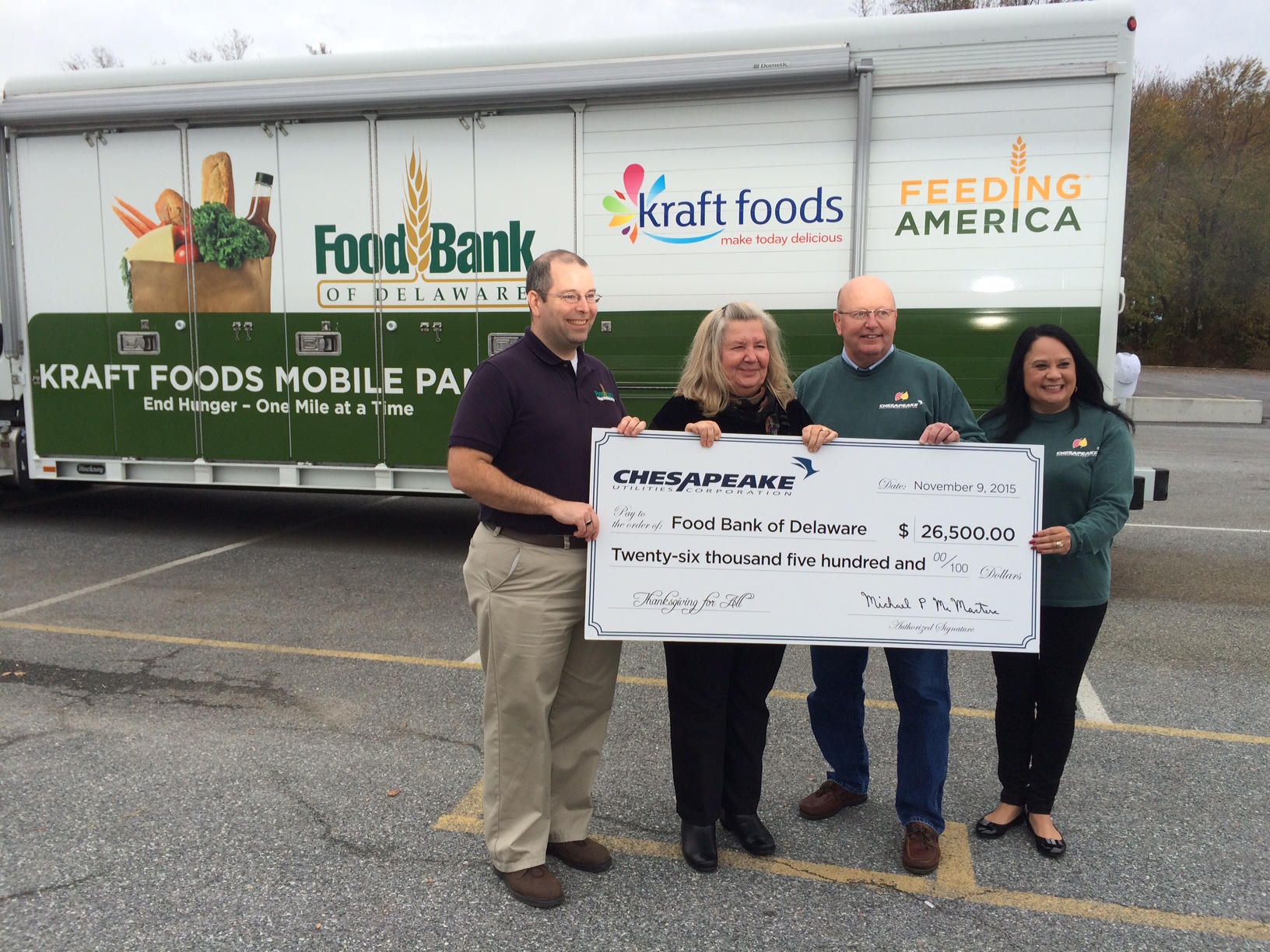 Thanks to Chesapeake’s support, we distributed 1,000 Thanksgiving meal boxes and frozen turkeys through four mobile pantries held in Kent and Sussex Counties. Volunteers from Chesapeake spent two days at the Milford facility packing boxes full of holiday staples in preparation for the four pantries held Calvary Assembly of God in Dover, Wesley College in Dover, St. Bernadette Catholic Church in Harrington and Long Neck United Methodist Church. In all, 167 employees volunteered 856 hours to complete the Thanksgiving For All project. 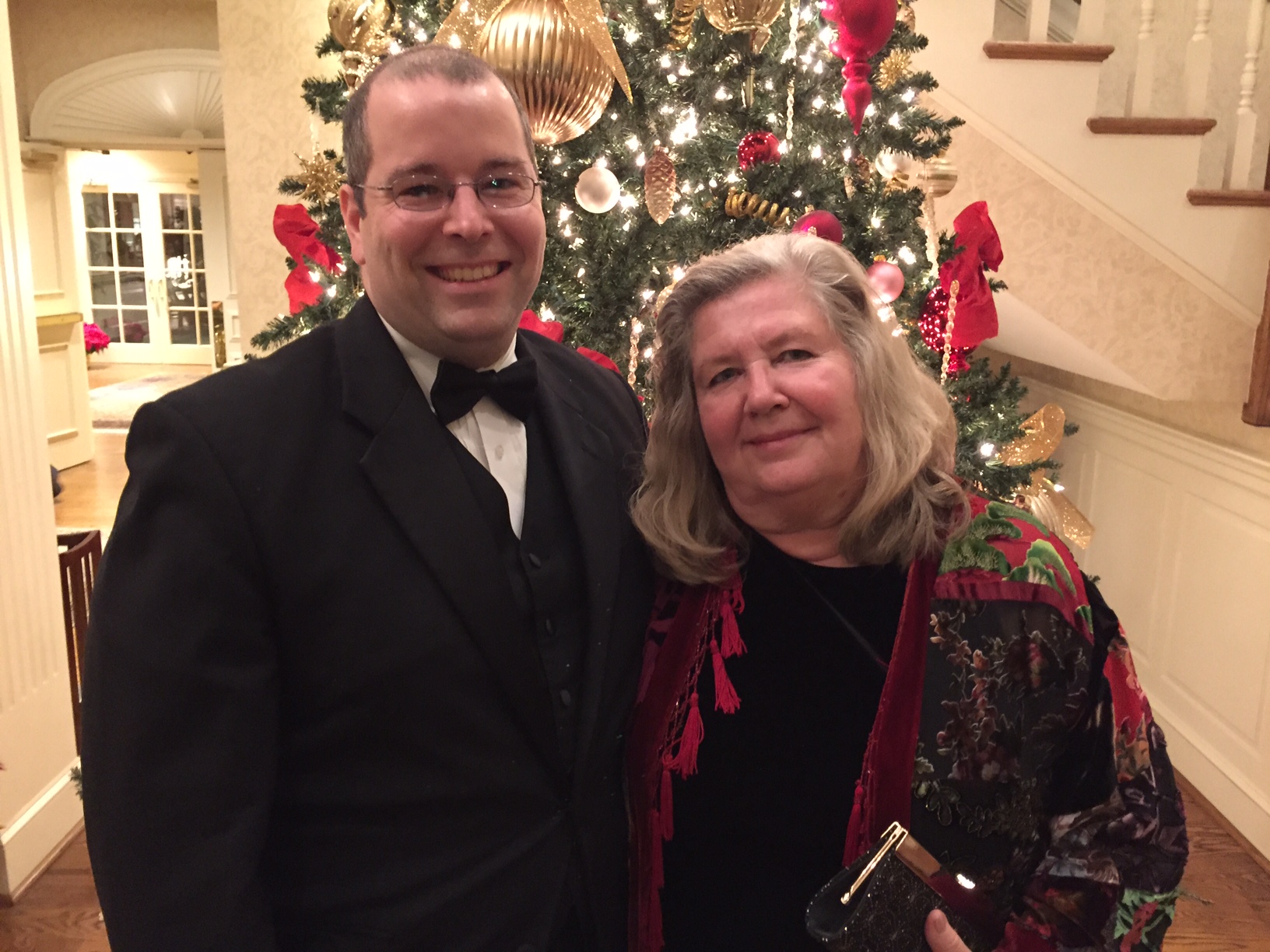 December 2015: The Harry K Foundation held its annual Christmas Gala on Saturday, December 12 at the Rehoboth Beach Country Club. Just a few days later, Harry K Foundation Founder, Harry Keswani, announced that the annual event had raised more than $200,000. This will provide additional funding to open more school pantries throughout the state and sponsor more children to participate in the Food Bank’s Backpack Program, a program that provides meals to children at risk of hunger w

Thank you for a great 2015! From all of us at the Food Bank of Delaware, best wishes for a joyous holiday season and a safe and Happy New Year! We will be closed December 23 (starting at 10:00 a.m.) -January 1 and will resume normal operating hours on Monday, January 4!