The Food Bank of Delaware is all about providing second chances. We do it through Delaware Food Works, our workforce development initiative, with programming in food service, warehousing and agriculture.

Larry Saunders isn’t letting his past dictate his future. He graduated from The Culinary School at the Food Bank of Delaware in 2015 after serving a five-year prison sentence, and since then life has only been looking up.

After graduation, Larry accepted an entry-level position with Texas Roadhouse in Bear and has been moving up the ranks.

Today, he is a regional trainer helping to open new stores and ensuring that kitchen teams are operating smoothly and according to company protocol.

Larry says he can’t imagine where he’d be today if it wasn’t for the help of The Culinary School.

“It gave me a sense of motivation… something to look forward to,” he says. “I was going to school from the half-way house and going to events where I’m standing next to [Former Governor] Jack Markell and at night I am going back to the halfway house… I was incarcerated and standing next to the governor… cooking for the governor. Standing next to Senator Chris Coons. It was cool, and they didn’t frown upon me at all.”

Larry’s background hasn’t held him back from a successful career in the food service industry. In his first two weeks on the job at Texas Roadhouse, he had already learned the fry and salad station.

“I took it upon myself to learn salad,” he explains. “One day salad was getting crushed. They had 20 tickets, and I just went over there and said, ‘show me what to do’. After that I was scheduled for a fry/salad shift by myself.”

Management recognized Larry’s hard work and he was asked to train on the broil station the next day.

“I knew the whole back of the house within 90 days,”he says.

One shift, Larry was working the fry/salad station by himself and the regional trainer manager/service coach was on site

“She came up to me and asked, ‘Are you doing this by yourself or is your partner on break?’ I said, ‘No, I am over here by myself,'” Larry explains. “She asked how long I was with the company. I said, ’90 days. I am fresh, I just got hired.'”

Impressed with his abilities, Larry was asked to do a store opening and train new employees on the fry station. “I was put up in a hotel, received a food per diem. I later sat down with her, interviewed and they gave me the title Corporate Trainer,” he says.

Larry opened the fry team at the Middletown restaurant in 2016.

“After that, it was history. I took off,” he says.

Today he is an overall trainer for kitchen operations and oversees training for three stores – Bear, Middletown and White Marsh, MD.

As a trainer, Larry is very hands on and loves to cook alongside the kitchen staff.

“We were just in Bear, and there was a new broiler cook on. I put my arm around him and said, ‘Look here, man, relax.’ I took every steak off the grill and taught him about his grill and the hot spots and cold spots. I told him, ‘You have all these rares cooking high. Have all the well- done steaks in the middle; that’s the hottest part of the grill.’ Within 15 minutes it clicked for him.”

Five years from now, Larry hopes to continue climbing the ranks at Texas Roadhouse. Next, he hopes to move into a product coach position and, ultimately, become a managing partner at a store.

His advice to current students, “Be attentive, ask questions. The program has a lot to offer, especially the ServSafe.”

Ready for a promising career in the food service industry like Larry’s? The next class of The Culinary School begin Tuesday, September 4 in Newark and Milford! Click here to learn more. 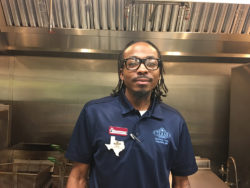