Students come to the Food Bank of Delaware’s Delaware Food Works Culinary School seeking a new career opportunity, but they are frequently surprised that The Culinary School opens the door not only to a job, but also self confidence and more. It’s not uncommon that students, in their graduation remarks, describe the program as life-changing.

That’s true for Milton resident Nyger Allah who is now enrolled in the Culinary School at the Food Bank’s Milford. Although her class’s commencement is scheduled for December, this 44-year-old mother of five said the workforce training program is literally the answer to her prayers.

The Culinary School is a 14-week course for people in transition to learn basic and high-end kitchen skills, ServSafe training, and life skills. The program includes 12 weeks of kitchen and classroom instruction, culminating with a 2-week paid work experience.

Ms. Allah, a New York City native, moved to Delaware to make a home with her children and their father. She was a stay-at-home mom to four of them without family connections or social support here when their father moved out. Because she was unable to work – she couldn’t afford child care – she was evicted and homeless.

“I thought I could get help in New York,” she said, so she returned and left her two older children with her mother, then moved into a domestic violence shelter, alone. The younger children were with their father. She said that although she was working for $9 an hour, the court determined she didn’t earn enough to pay rent and support her children.

“I had no place to go,” she said, wiping tears as she described a seven-year challenge that included struggling not only to find a bed to sleep in, but also navigating the court system to regain custody of her children.

She described walking 5 miles, no matter the weather, every day – half the distance to work – so that a co-worker could pick her up. “I listened to gospel music on my phone and when it was daylight, I read my Bible as I walked,” she said. Eventually she was able to find a job where she earned enough to be able to save toward her children’s future.

She recalled the frustrations she faced. “I laid on the floor, and I talked to God. I was going to give up,” she said. Her children were returned to her custody, and she enrolled them in school.

“I learned you have to stay steady in what you believe in and be in who you are. I stayed with that. I give all the glory to God; that’s where my strength came from,” Ms. Allah said.

Serendipitously, she noticed a Facebook photo of someone wearing a Food Bank chef uniform while looking for apprenticeships, and through that connection she discovered the Food Bank’s Culinary School. “I went to the web site. I was shocked, and I was happy. I had no idea this existed or I would have taken advantage of this earlier,” Ms. Allah added.

“This is the first time in my life doing something my heart desires. I’m 44-year-old years old, and I’m proud to be here. Chef Tish (Badamshin, chef instructor) is awesome; she’s helped me so much,” said Ms. Allah.

In addition to attending classes, this student now has a part-time job at Crust & Craft, a SoDel restaurant in the Midway area. “It’s very exciting. I love it. The experience is real pace. They have very high standards, and I hope they are patient with me. I’m learning to execute faster,” she said.

“I thank God for the Food Bank, and I tell everybody about this program. One day, I’d like to own my own restaurant.”

Visit www.fbd.org for more information about the Food Bank of Delaware and The Culinary School. 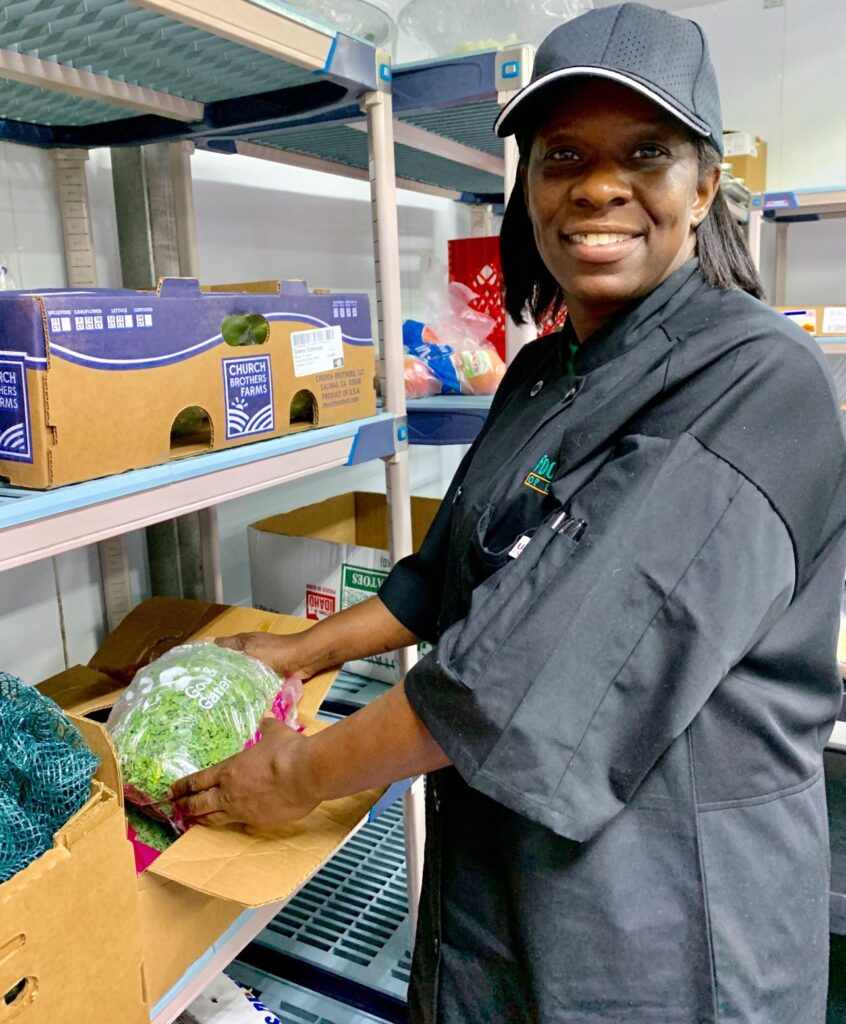