Hassan Amenu-El was literally a standout in the Food Bank of Delaware’s sixth class at The Culinary School in Milford.

First, it’s hard not to notice that he towered head and shoulders above his classmates, so at 6 foot, 7 inches tall he’s used to being asked about his height. He takes queries with a good-natured smile.

Hassan, 21, grew up in the Baltimore suburbs of Owings Mill, Md., then moved to Delaware to be with his godparents after he graduated from high school.

He was exploring other job opportunities; he worked in a nursing home and for a moving company before relocating here.

Ironically, it was his godparents who connected him with our Culinary School, a Delaware Department of Education-certified trade school. They learned about the opportunity last summer while picking up their Community Supported Agriculture (CSA) box.

It seemed like a match made in heaven, so to speak, because Hassan already enjoyed cooking at home. Shrimp Alfredo and sweet potato pie were among his go-to dishes.

And the opportunity to learn skills and participate in an internship appealed to him.

“I can make it a career. I was interested in the culinary world before school, but I didn’t have any direction,” he said.

“Chef Tim was the best, and working with my classmates, we had to become a team,” he said.

The opportunity to intern at Dover Downs was the icing on the cake, so to speak.

During the internship, he was assigned a variety of work stations including the buffet, the steak experience, preparing pizza and cooking shrimp and gourmet grits.

“I learned a lot,” he said. In addition, and more importantly, he landed a job working the late afternoon/ dinner shift.

“My goal is to keep moving up, to go as high as I can go. I want to take more responsibilities and meet more challenges,” Hassan said.

“I recommend this (The Culinary School) to anyone I come across, anybody interesting in the culinary world,” he said.

To learn more about the Food Bank of Delaware’s The Culinary School, visithttp://www.fbd.org/the-culinary-school/ 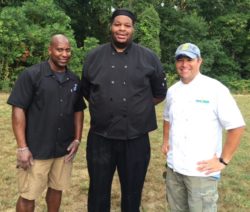