Nelson Porto is all smiles these days. Yes, he’s working long hours, but there’s a huge pay off . . . financially, emotionally, mentally. He’s doing something he loves, and he’s earning a decent income. In fact, he is proud to have two jobs: one at The Rookery South and the other at Baywood in Long Neck.

Nelson graduated in December, 2016 from the Food Bank of Delaware’s Culinary School in Milford. He enrolled at the urging of his wife. She encouraged him to pursue his passion for cooking. At the time, Nelson decided to leave a long-time career in information technology. He was burned out: tired and miserable.

Yet last month, he was one of two Culinary School alumni who returned to speak about their experiences here during a special visit from Congresswoman Lisa Blunt-Rochester (D-Delaware).

“I didn’t want to leave this place,” Nelson said. “I had amazing support from all the staff. They became like a family to me.”

Of course, after he graduated, he had to move on. His first job after graduation was at Abbott’s Grill in Milford, but his family moved their home closer to Rehoboth Beach.

He found employment as a sous chef at the Rookery, a public golf course with a restaurant in the clubhouse, and also working on the line for events at Baywood near Long Neck.

Nelson takes pride in his accomplishments, and at the Rookery, his employers have given him some creative freedom. He’s been making soups that sell out almost daily, and he’ll have a Cuban sandwich – reflecting his cultural heritage – on the menu there.

“It’s pretty neat to see your work displayed and sold,” he added.

“I have a passion for the kitchen,” he said. “I found support here (at the Food Bank of Delaware), and now I’m moving forward. I challenge myself every day. I am moving forward, and I want to make a name for myself.”

Nelson said he encourages others to consider training at The Culinary School at the Food Bank of Delaware.

“The Food Bank can make a positive change in many people’s lives,” he said. “And the paychecks are coming in.”

For more information about The Culinary School at the Food Bank of Delaware, please click here. 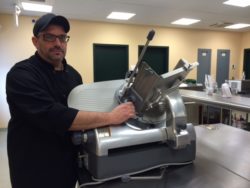