For most of her career, Latoya Burise served in the military as a food service sergeant.

On the military base, Latoya and her team cooked in bulk for 300-400 people at a time.

After leaving the military in 2012, she worked several jobs including security. Wanting to get back into the food service industry, Latoya found out about The Culinary School through a friend who had learned about the program at an event where she met Food Bank of Delaware President and CEO Patricia Beebe.

Latoya admits she had lost some of the skills and training gained through her military experience, and formalized training was what she needed to get her foot back in the door.

Latoya will graduate with her class tomorrow. “I have learned a lot,” she says. “The chefs were very knowledgeable. Sometimes you think you know and you don’t know. They really taught me a lot.”

For Latoya, a visit to the Sysco Food show at Dover Downs was most memorable. Her favorite dishes to prepare include seafood as the main ingredient, so a visit to George and Sons Seafood in Hockessin was also a highlight.

The skills gained in the kitchen, classroom and through her internship experience at La Fia, have prepared Latoya for employment. While interning at La Fia, Latoya experienced working in a kitchen that prepares everything from scratch.

Recently, she was offered a food service position at Delaware Park and looks forward to adding experience to her food service resume.

For others interested in pursuing a career in the food service industry, she highly recommends The Culinary School. She has visited schools with Chef Donnie Stephens to encourage students to apply upon graduation.

Latoya has even recommended the class to a co-worker who will start in June.

For now she is focused on her new position at Delaware Park, but having a long-term goal is important to Latoya. Five years from now she hopes to be in a management position or the owner of her own little cafe!

Interested in a career in the food service industry? Click here to learn more about The Culinary School at the Food Bank of Delaware! 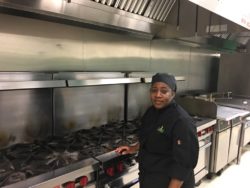