So you’ve heard about the tight job market?

In his position, he sees job opportunities, and he would be happy to hire skilled, hard-working people who are willing to work.  He’s made, and kept a few hires from The Culinary School at the Food Bank of Delaware. But he still has spaces to fill.

“It’s hard to find qualified people in this business, no matter where you are,” Chef McCord said. “I can teach people to cook.”

There’s a catch: in addition to having culinary skills, employees are expected to come to work – on time, as scheduled.

Chef McCord knows the culinary business, and he looks at it from the perspective of managing kitchens in a casino.

He’s a professionally trained and educated chef, graduating from Johnson & Wales University. Early in his career, he worked for hotels in Providence, R.I. and Hershey, Pa., and was a member of a hotel-opening/staff training team in Minnesota and Florida.  Then he’s worked for casinos for 25 years, including the Taj Mahal in Atlantic City and the Twin Arrows in Flagstaff, Ariz.

“It’s the best job ever,” he said, but now the biggest challenge is not in preparing and presenting delicious food. It’s in maintaining and cultivating a skilled staff.

Those unfamiliar with the culinary industry might have trouble visualizing the size and extent of the kitchens at Dover Downs. They are hidden from the guests’ eyes, but they are a constant hub of activity. The food service operation is staffed by 90-95 culinary people and 35 dishwashers.

This is no 9-to-5 job; it’s a 24-hour operation that keeps food and beverages going out to guests, whether it’s a buffet, room service or restaurant.  In addition to the casino visitors, Dover Downs hosts NASCAR races, of course, plus conventions, proms, fund-raising galas, and banquets for up to 1,000 people.

“And everything has to look good,” Chef McCord said. “We have to be great at it every day.”

There’s even an employees’ cafeteria.

When Chef McCord started his tenure at Dover Downs, he came with an eye on future staffing. He created a Culinary Advancement Program, a structured in-house education and training course that would allow him to promote from within.

Students commit to 11 months of training, including of two hours of classroom work each week.

The Food Bank’s Culinary School, he explained, provides a good foundation for graduates to find an entry-level job.

“The most important thing is that students come with ServSafe. If you know nothing else, food safety, that’s huge. The Food Bank is a good place to start,” Chef McCord said.

Take for example, Hussan, who graduated from the Food Bank’s Culinary School in Milford last year..

“He started as a buffet line attendant, but when the Winner’s Circle opened several months later, Hussan was lead cook. He’s a hard worker, and he had an opportunity to move up. I will get him ready for the next level. It’ doesn’t make any sense to hire from outside if someone here is ready,” said Chef McCord.

“I love to see people who do well get promoted. I have been blessed with nice people here.”

For more information about The Culinary School, please click here. 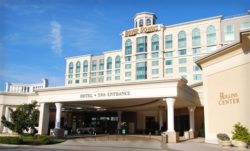