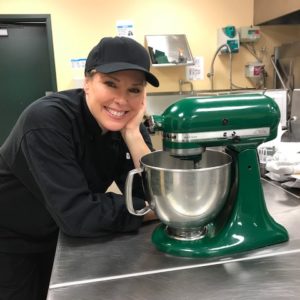 It’s probably safe to say that Meg is the first professional opera singer who has also trained at the Food Bank of Delaware’s Culinary School in Milford. She is a professionally trained mezzo soprano whose talents have taken her around the world, including on stage at the famed Metropolitan Opera – “The Met.”

Her tuition was funded through Delaware WONDER, a federal grant geared to getting people into the workplace and off SNAP benefits.

The Long Island, N.Y. native returned to her parents’ home in Dover following the death of her mother in March.

“I’m restoring my childhood home,” she said. She’s also a single mother to a 12-year-old son.

Her first day of class was June 5, and when she graduates in September, Meg is looking forward to using her newly honed skills to entertain at home and also as professional pastry chef.

“I love to entertain and have people over. Anything is a reason to celebrate. I’ve often thought about opening a bakery,” she said. Last week she started her two-week internship at Dover Downs under the watchful eyes of a pastry chef.

“A pastry chef is meticulous, and Chef Tish (a chef instructor in Milford) sees that is where my strength lies. It speaks to the creative side always in me,” Meg added.

Her bakery, though, would have a higher purpose.

“I want it to have a religious slant, maybe a Bible verse with each purchase. I want to help people. This is something I’ve thought about. I am wondering if God put me here for a reason,” she said.