Premier Wine & Spirits is excited to announce a new, monthly interactive tasting series in partnership with Penn Cinema on the Wilmington Riverfront and Out & About Magazine. “Movies on Tap” will feature meet-and-greet tasting opportunities with some of the area’s most beloved breweries and their brewers while providing a rare opportunity to view cult-classic films on the big screen.

Attendees will have a unique opportunity to hang out with a local brewer; sample and learn about their beer; and then watch a classic film of the brewer’s choosing – all for a good cause. Tickets are $20 which includes beer samples, movie, and popcorn with proceeds benefiting brewer’s charity of choice.

The premier beer fans and movie lovers can purchase tickets through the link below. A full schedule for the series will be released in the coming weeks.

Penn Cinema is one of a few theaters in the state to carry its own liquor license. “We realized there was a really unique opportunity to bring the brewing industry and movie industry together – while supporting the community we all work in together”, said Ryan Kennedy, Director of Marketing for Premier Wine & Spirits. 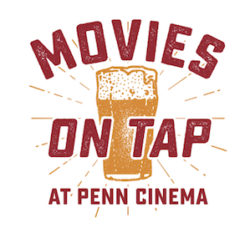