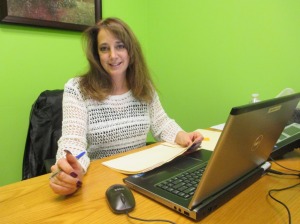 Ellen Roland is the new Culinary School program manager for the Food Bank of Delaware’s Milford branch. Although she’s new to the position, she is not unfamiliar with the Food Bank. She brings a wealth of experience, including one that’s unique: she is a graduate of the program as well.

“I think I have a different perspective. Because I was a student, I have the best of both worlds,” she said.

“We are happy to have Ellen join our team at the Food Bank of Delaware.  As a former student, we know Ellen will bring unique insight into helping us grow our program,” he said.

The Culinary School is a 14-week program for adults. It is also a certified trade school by the Delaware Department of Education.

Ellen, a New York native, moved to Milford about 18 months ago when her husband’s job transferred him to the area. Her background is in the retail world, managing and opening up new stores.

She’s the youngest of 12 children, and when her mother became ill, she put her retail career on hold to become a caretaker.

When it was time to re-enter the working world six years later, Ellen took a second look at her skills and thought about opening a catering business, specifically one geared toward weddings.

Prompted by a notice in the newspaper, she enrolled in The Culinary School and graduated with Milford’s second class.

“I’ve always loved to cook, and I’ve always been around food,” she said, adding that her mother regularly made home-made pastas and bread.

“I was brought up old school.”

Ellen said her experience at The Culinary School provided valuable education, complementing what she already learned in the retail world, even though she didn’t go to work in a restaurant after her graduation.

She said that Chef Instructor Tim Hunter encouraged her to seek opportunities in “the front of house,” the food service term for the dining room, as opposed to the kitchen.

So when she learned about the opening for a program manager here, she applied.

Still new to the job, Ellen says she is enjoying not only the challenges of learning her new responsibilities, but also helping students become successful.

The students in the current class will graduate on Friday, May 8, so they are moving into their two-week internships very soon.

“It’s so great to be able to help people, so gratifying,” she said.

In addition, Ellen is now working to populate the next class of students by scheduling interviews with possible recruits.

“I’m excited and proud to be a part of the Food Bank team,” she said.

For more information on The Culinary School, visit http://www.fbd.org/the-culinary-school/.