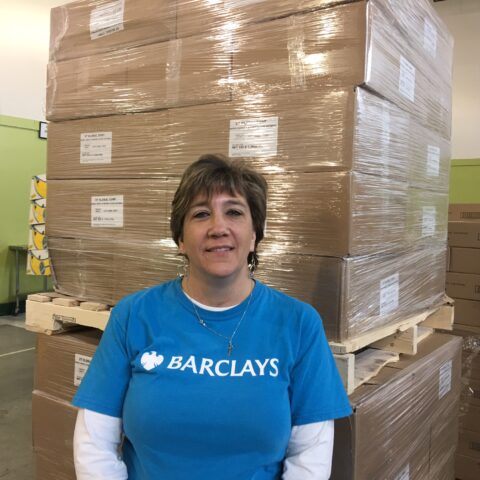 April is Volunteer Appreciation Month! Throughout the month we will highlight the stories of volunteers who have committed themselves to creating a community free of hunger!

Maria Reber has volunteered at the Food Bank of Delaware on a regular basis since 2012.

“When I started working full time at Barclays, I learned that they encourage their employees to volunteer in the community and even give each employees four hours of company time each month to volunteer,” she explains.

The Food Bank’s vision of a community free of hunger is important to Maria, as she grew up knowing firsthand what it is like not to have food.

“Growing up in a large family (five kids) on a one earning blue collar income and my parents too proud to accept assistance, times were tough,” she says. “We had a small plot of land behind our house that belonged to the city, but the city could not develop on it so they let us farm the land. We grew a full year’s worth of vegetables. We froze and canned the bounty to get by in the winter months. We were vegetarians in the 60’s before it was a trend.”

Despite struggles, giving back was important to Maria’s family.

“Even though compared to others we seemed to never have anything; whenever we outgrew something, had an abundance of something, or someone needed help, my parents were always the first to volunteer, to give away, or give a hand,” she points out. “I learned early that sitting idle was not acceptable when others were busy or in need. My mother who has been on a fixed income most of her life still to this day still sends the Food Bank of Delaware a check each month.”

Those values, instilled at a young age, are still important to Maria. When she isn’t volunteering with a group from Barclays, she comes to the Food Bank on her own. At the end of each year, she goes to the Food Bank’s online scheduling site, VolunteerHub, and signs up for the first six to seven months of the upcoming year.

“I have had the opportunity to work with some great teams, met some new people and run into some folks that I worked with in the credit card industry over the last 30 years,” she says. “The work is usually fast past, the time goes quick, and I feel good that I am able to support an organization that I know makes a difference.”

Thank you, Maria, for your commitment to a community free of hunger! Click here to learn more about volunteering at the Food Bank of Delaware!